PNWER has collaborated with our partners at ACES Northwest Network to present to the Washington State Transportation Commission on a variety of issues, including the Future of Logistics on Tuesday, October 19 from 9 am - 12 pm Pacific. You can watch the recording of that session here.

During PNWER's 30th Annual Summit, hosted as a hybrid event in Big Sky, Montana, the Transportation and Infrastructure working groups organized exciting programming on various critical T&I related topics. In collaboration with All Aboard Washington and Big Sky Passenger Rail Authority, PNWER hosted a Pacific Northwest Rail Forum, where experts and community members from the region discussed the present state and future of rail, and how the region can leverage existing systems to stay a competitive and green region.
Session 13: Infrastructure Today and Tomorrow
Wednesday, August 18 | 8:00-9:15am MT
​Transportation and Infrastructure have emerged as priority issues in both the U.S. and Canada. Hear from key transportation legislators from across PNWER as they discuss recent transportation successes, and what is on the legislative agenda for upcoming sessions.
Sponsored by BNSF Railway

Session 14: Safer, Faster, Cleaner- The Future of Freight Mobility
Wednesday, August 18 | 9:30-10:30am MT
Autonomous and electrified transportation is coming to freight vehicles and aircraft much more quickly than it is to the general public. The incorporation of autonomous Level 3, 4, and 5 technology has the potential to make trucking safer and more efficient, while preserving jobs and keeping drivers closer to home.
​
The past year has seen both stronger corporate climate promises, and a new federal push towards electrification of transportation. Explore what the Pacific Northwest has been doing to lead the nation - in the US and Canada - on electrification initiatives and effective strategies for this transition to increasingly electric and autonomous vehicles and aircraft.
Session 18: Pacific Northwest Rail Forum
​Wednesday, August 18 | 2:45-5:15pm
Sponsored by All Aboard Washington and Big Sky Passenger Rail Authority

Can P3s enhance  project delivery and permit reform? Why do we need them in limited resource and lower expertise environments? What purpose do they serve for urban regions (Vancouver B.C., Seattle- Tacoma, Portland) and rural regions (Port of Everett, Washington and Kalispell, Montana)?

The permitting process for infrastructure projects across the United States is dated and often redundant, causing expensive delays before projects are even cleared to begin construction. In the U.S., the Federal Permitting Improvement Steering Council (FPISC) seeks to streamline this federal permitting process without changing existing regulations, applying a 21st century program management approach to qualifying federal projects. Canada was successfully able to streamline federal and provincial permitting to complete the Asia Pacific Gateway project in the mid-2000’s, and has valuable best practices that can be implemented in the U.S. From a labor perspective, permit modernization and streamlining - without changing the substance of environmental regulations or other laws - could help support local job markets, especially following the COVID-19 related economic downturn. Following expert presentations, state legislators from Alaska, Idaho, and Washington discussed how a state-level permit streamlining council, similar to the FPISC, could help local infrastructure projects.

Rail transit is an essential part of the transportation of consumer goods across North America. However, the areas where railroads intersect with highway systems cause congestion, delays, and present significant safety risks.  With the potential for a major Congressional infrastructure bill on the horizon, federal highway-rail grade separation must be prioritized to improve safety and efficiency of the United State's infrastructure.  How can federal, state, and local governments work with railroads and community stakeholders to implement high-cost grade separation projects to improve community safety and increase efficiency?

Moderated by Bruce Agnew and Chuck Winder, featured speakers include:
Top of Page 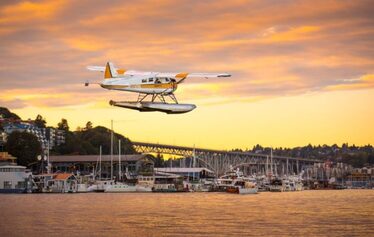 “Harbour to Harbor” is an important addition to the rich mix of highway, rail, ferry, cruise ship, seaplane and fixed wing aircraft transportation operations that uniquely defines our bi-national region. Vancouver and Seattle share similar innovative, risk-taking cultures and a one hour “Harbour to Harbor” seaplane connection will accelerate the “Cascadia Innovative Corridor” initiative launched by Microsoft and others that has expanded cross-border employment and attracted world wide talent to the region.
​
Our regional border security agency leaders also have a well-deserved reputation for cross border cooperation and effectiveness in partnering with private sector transportation providers in deploying innovative, technology based procedures for enhanced security. “Harbour to Harbor” seaplane service affords Transport Canada and the Canada Border Services Agency a new and exciting venue to continue to showcase Canada’s innovative approach.

Additional resources and information can be found on the Tourism working group page here.
Tourism Working Group
Top of Page

Since 2012, the transportation of crude oil by freight rail has been rapidly increasing in Washington and other states in the Pacific Northwest. The spate of recent derailments in Canada and the U.S. has led to new regulations in oil train operations and tank car construction, along with an increased local desire for transparency and accountability in regards to oil train routing and scheduling. In order to address these issues, the Center for Regional Disaster Resilience has begun to explore oil freight rail transportation and safety as part of its Program Areas.

This symposium provided a comprehensive overview of the current and future status of oil by rail transportation and emphasize partnerships to help ensure oil transport safety is being addressed across the region. By fostering dialogue between public and private sector entities, PNWER and CRDR hope to increase mutual understanding of oil train safety issues in a broad and holistic manner by including stakeholders from all parts of the supply chain both in the U.S. and Canada. The Symposium agenda is still under development; topics will include an overview of the transportation of hazardous material by rail, the driving factors behind the rise of oil transportation by rail, potential safety hazards, incident response, and planning for future movement of other fuel products.